Our hospital is allowing one person per pet into exam rooms. Click here for details on our policy. 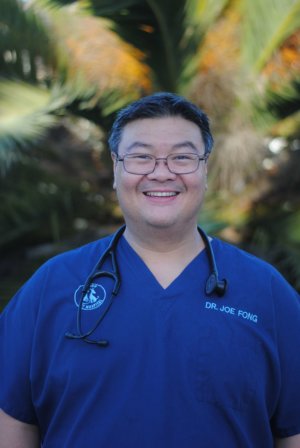 Dr. Fong joined Irving Pet Hospital in 2007 and serves as the practice’s Medical Director. He received his DVM from UC Davis and is a member of the California Veterinary Medical Association and the American Veterinary Medical Association. A native San Franciscan, Dr. Fong says he could not imagine life as anything other than a veterinarian. “There is an honesty that animals bring to our lives,” he says. “They accept us for who we are and don’t judge. It is that bond and the excitement of science and medicine that makes every day a new day.” Most of all, Dr. Fong says he enjoys being involved with patients from the time they are kittens and puppies and watching them grow up to become wonderful additions to the family.

At home, Dr. Fong and his wife have a child in elementary school and many pets they enjoy caring for, including two Old English Sheepdogs named Pepper and Bobby and a long-haired Dachshund named Magic. They also have several birds including Bourke’s parakeets Gabbie, Cassie, Gucci, and Charlotte, as well as a Blue Pacific Parrotlet named Cheep Cheep.

Our hospital building is closed to the public, but our safe and convenient curbside care is still available!